The second ferrography procedure is called an Analytical Ferrograph. Again, a small portion of the sample is diluted with a solvent, but this time it is flowed over a glass slide sitting on a strong permanent magnet. The magnet pulls out ferro-magnetic particles and aligns them along its magnetic field vectors for easy viewing. The larger particles will be pulled out first, followed by increasingly smaller ferro-magnetic articles. Some non-magnetic particles will also be scattered along the slide in a non-magnetically aligned manner. This makes identification of ferrous particles relatively easy. The slide is then examined under a microscope, various particle types are identified and quantified, and a wear judgment is made.

Ferrography actually consists of two different procedures. The first is called a Direct Read Ferrograph. A small representative portion of the lubricant, usually 1.0 ml, is diluted with a solvent and flowed through a glass tube at a slight incline over a permanent magnet. Two light detectors placed in series along the glass tube will measure the difference in light transmitted through the tube between the beginning of the sample flow and the end of the flow. The instrument is first "zeroed" with the portion of sample that reaches the detection system. This will help compensate for differences in the oils' colors. Ferro-magnetic particles are pulled out of suspension by the magnet and deposited on the bottom of the glass tube, as well as in the light paths of the two detectors. The detectors then measure the percent transmittance difference caused by the accumulation of ferro-magnetic particles. As a function mostly of its placement, the first detector will be "looking" through an accumulation of particles ranging from sub-micron to over 100 microns, and is reported as Direct Read Large or DRL, whereas the second detector will be "looking" through an accumulation of particles generally less than 5 microns in size, and is reported as Direct Read Small or DRS. The numbers generated are an empirical value ranging from 0.0 to 180.0. Larger numbers can be obtained by sample dilution. 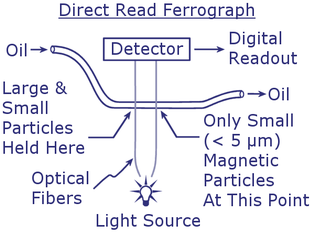