Disadvantages
The major disadvantage of the atomic emission spectrometer is the particle size limitation. Usable detection efficiency is limited to an average of 10 microns, thus large 50 and 100 micron particles will not be seen as easily by the detection system. The limitation on the detection efficiency size will vary with each metal, along with such things as the thickness of the metal oxide layer on the particle's surface and the melting point of each metal. Usually, however, when the number of large particles increases in a sample, so does the number of smaller particles (1-10 microns in size). This is one of the reasons that trending becomes so important when looking at emission spectrometer data. Also, this size limitation can be overcome by acid digestion of the sample which reduces the metals particles to an ionic state so they can be easily seen by the spectrometer. This is done at the sacrifice of speed and efficiency, however.

The heart of most lube oil analysis programs is a check for metals. With today's technology, this is usually a quick, simple, and cost-effective test. The two most common instruments used for this are the ICP (inductively coupled plasma) spectrometer and the rotating disk atomic emission spectrometer. Either of these two instruments can be set up to analyze twenty-five or more single metal elements simultaneously. This section is focused on the atomic emission spectrometer.

When this test is conducted, a carbon disk rotates in a small representative portion of the sample. The disk's rotation throws some of the oil into a high voltage AC arc between the rotating disk and another carbon electrode. The temperature of this arc is from 4000° to 8000° Kelvin, depending on a number of factors including the oil type and major constituents. This 'burn' lasts for about 30 seconds. As the metal atoms or small particles are vaporized in the arc, each metal gives off light at a particular wavelength, and is part of the total emitted light. A prism or grating then diffracts the emitted light into different wavelengths, and the intensity of each of the metal wavelengths is measured by its own photo-multiplier tube, or PMT. A computer plots the output from the PMT on a curve which was developed from NIST traceable standards. The curve position is then converted back to parts per million, or ppm. This is the value you receive on your reports.The spectrographic metals reported fall into three categories: 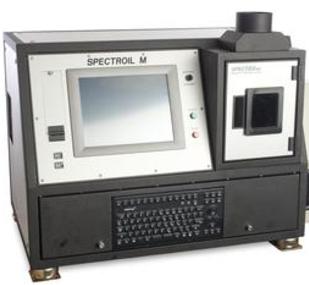